Feel what you Feel…

I got triggered recently by something a peer and friend posted on her Facebook wall, She is someone whom I admire, respect and who, is in a position of authority.

“Anxiety and Depression are not the feelings – they are the lids that we put over our soup of feelings…because we are afraid of them…In the soup of emotions there can be anger, rage, frustration, but also joy, bliss, excitement….

If we “stuff it”, put a “nice smile”, become a “good girl”, peaceful, sweet, and going along with whatever comes our way…. We cannot feel much – the ugly or the cool stuff….

Depression – may have a good tight lid, so we do not have to feel the feelings….

So how about feeling what you are feeling? Why Not?!

Feel angry? – Feel angry! – Inconvenient??? – for sure, but much better that iron lid on it….
and walk through depression or anxiety…”

My immediate reaction to her post was “WTF – who the hell are you to tell me that….!” and since then I have been ruminating on it.

It is true that there are often a myriad of emotions underlying the predominate feeling and that the term we use may be just a label or lid. But, who are we to discredit it or tell someone what they are feeling?  And yes, I can agree that if you are angry, feel angry, sad, feel sad.

But what my problem is that it suggests that anxiety and depression are not real feelings.

There are two ways to misuse emotions – one is to react on them (fire) or to repress (water, douse) them.

Sometimes, anxiety and depression are just that – anxiety or depression. Sometimes they work alone, and sometimes as a dynamic duo.

Much of these feelings (for me) arise out of insecurity, doubt, fear and low self-esteem, coupled with an overwhelming sense that I cannot trust my own judgement and, especially when out of control, a paranoia sets in that people, the world is out to get me.

Throughout my life, I have clung to confidant, stronger, dominant people to tell me how I should feel, dress or think, effectively using them as my crutch.

It wasn’t until I read this post on yoga teachers providing dietary advice to students that it became clear what the other trigger was. While our hearts to help may be in the right place, we really don’t know what someone is experiencing, feeling or thinking or why – and more so, we are not in a place to dictate this.

It is not useful or helpful to tell someone who is experiencing anxiety, depression (or anything else) that their current feeling is really a label for something else. In doing so, we invalidate thier feelings, further enhance self-doubt, and provide proof once more not to trust thier own judgement, thoughts or emotions.

In my work with Inner Journey, I found a safe environment, in which I could sit with the shit. Yes, it’s messy, it’s hard and totally unpleasant, but it is necessary in order for healing to begin.  My therapist was my life line as she provided a safe non-judgmental space for all of my emotions to exist including the totally nasty evil thoughts (about myself and others) to exist – a voice to the shadow 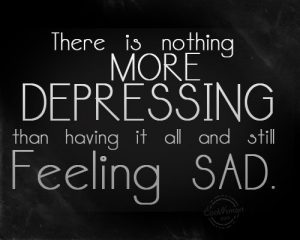 I got to know full well where anxiety (and other emotions) lives, what it feels like and its accompanying thoughts. When the thought and emotions became too intense I could also see how I shut myself off and closed doors, going to a numb like state.

Rather than repressing them, or trying to rename them, they were given a voice and a place to live. In doing so, their sting and intensity has lessened and I’ve learned that they are will be a part of me and my life’s work.

And really, isn’t that the real yoga, holding compassionate space for yourself and others?

ADDENDUM: I have been informed that her post was actually meant to reference the work of Michael Stone in which he makes a distinction that first you have the FEELING, then you have or name the EMOTION. The challenge is that people often try to lump thier feelings into one emotion, often using the same ones. Not sure exactly where this is referenced but my guess may be that it is this: https://michaelstoneteaching.com/emotional-granularity/

I’d also like to add, that apparently, that post was a trigger for a few other people, though I know it was meant for discussion and good conversation.