Yoga is something that only can be experienced.  No books, videos or even other testimonials will provide an answer for you.  It is something which you have to discover for yourself.

Yoga has definite historical roots in Hinduism, Buddhism and Jainism, however, it is up to you as the student whether to make your practice devotional or not.

Yoga is the name given to an ancient form of tools and techniques for creating a healthy body, a steady mind and a better sense of union with the divine.

In the west, it is primarily a body practice known as Hatha yoga. Using the body as our medium we take different forms and shapes to explore where the mind and breath goes when moving and when still.

Approximately 200 years AD, the physician-sage Patanjali defined the state of yoga as:

Yogah citta vritti nirodohah – sutra 1.2
Yoga is the cessation of the thought waves of the mind.

Abhyasa vairagyabhyam tannirodhah – sutra 1.12
Practice and detachment are the means to still the movement of consciousness.

Which means that, when practiced with honesty, with diligence and non-attachment, yoga has the power to cut through all the machinations of the mind allowing our true selves to shine forth. In other words, without your stories – who are you at your essence?

The Tools
Patanjali divided the science of yoga in 8 basic sets of techniques.

1. Yamas – Moral restraints aimed at destroying our lower animalisitc nature, and things we try to avoid:

2.  Niyamas – Self-restraints, things to do and practice:

3.  Asanas – Means seat, and refers to the practice of working with the body, and the one practiced mostly in the west.

4.  Pranayama – Regulation or control of the breath.

5.  Pratyahara – Withdrawal of the senses in order to still the mind.

6.  Dharana – Concentration. When Dharana is achieved, it leads to the next step:

7.  Dhyana – Meditation is that state of pure thought and absorption in the object of meditation. There is still duality in Dhyana. When mastered Dhyana leads to the last step:

8.  Samadhi – The superconscious state. In Samadhi non-duality or oneness is experienced. This is the deepest and highest state of consciousness where body and mind have been transcended and the Yogi is one with the Self or God. 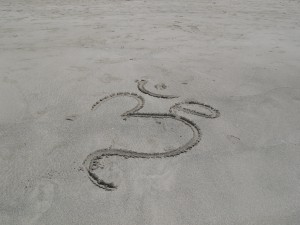 The point and semicircle are separate from the rest and rule the whole. The point represents the turiya state of absolute consciousness. The open semicircle is symbolic of the infinite and the fact that the meaning of the point can not be grasped if one limits oneself to finite thinking.